„Well Font could best be described as mostly moist and very frustrating as it only rained at night with the days being nice. Still managed to do a few things though, mostly on the same day. The highlight being Beaux Quartiers at Rocher Bouligny, one that I’ve tried a few times but always been thwarted by wetness before. So after despatching that I thought I’d try the moves on Gecko, Five minutes later I topped it out, almost slightly disappointed at how easily it went, but still a great feeling to do such a good problem although probably only 8A in my book.“ 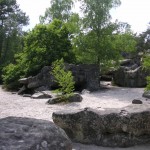